Senator Gideon Kipsielei Towett Moi was born on October 22, 1963 in Nakuru to the late Daniel Toroitich Arap Moi, the Second President of the Republic of Kenya, and the late Mama Lena Moi. The Senator is the last born in the family of seven children.

Senator Moi started his primary education in 1970 at the prestigious Kenton College Preparatory School, Nairobi, where he attended both junior and senior classes and completed in 1976. He then proceeded for his O-levels at Strathmore College, Nairobi, between 1977 and 1980 where he was among the first 24 students to be admitted when the College opened its doors for secondary studies.

In 1981, Senator Moi proceeded for his A-levels at St. Mary’s School Nairobi where he completed high school in 1982. He then joined The University of Salford, Manchester in the United Kingdom for his university education where he obtained a Bachelor of
Arts degree in Economics. 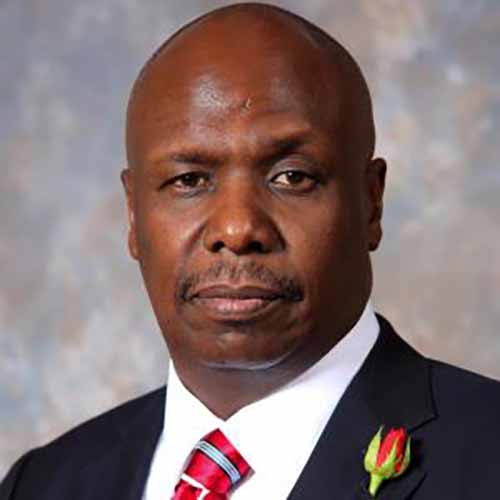 After graduating from The University of Salford, Senator Moi returned to Kenya and joined family business. He has been instrumental in setting up and providing oversight for the expansion of a number of business ventures that have been successful not only in commercial terms but also in job creation and contribution to the economic growth of the country.

Senator Moi’s political and leadership star rose further when he was appointed a Member of Parliamentary Select Committee on Energy, Communication and Public Works. The committee members elected him the Chairman of the Committee confirming the confidence the MPs had in him.

In 2013, Senator Moi was elected Senator to represent Baringo County. He was re-elected as Senator in 2017. Besides being the Senator for Baringo County, Hon. Gideon Moi is also the National Chairman of the country’s independence party Kenya Africa National Union (KANU), a position he has held since 2013. His predecessors as KANU Party Chairman are Kenya’s founding President His Excellency President Jomo Kenyatta, the Second President of Kenya the late Daniel Toroitich Arap Moi, and the current President, His Excellency President Uhuru Kenyatta.

During the First House of Senate, Senator Gideon served as the Chairman of
Parliamentary Committee on Energy. In this capacity, he authored the Local Content Bill. This Bill has emerged as the best and most progressive law that has ever been drafted in the extractive sector.

The Bill requires extractive companies to state how local communities will benefit from the proceeds before they are licensed. It enhances ownership, control and financing connected with the exploitation of gas, oil and other minerals by the local communities.

The Local Content Bill will put to an end the conflicts that have rocked communities in oil and gas-rich areas. It ensures minerals do not become a curse to local communities as has been the case in most oil producing nations in Africa. The Local Content Bill also ensures that local oil and gas industry is protected so it can compete fairly with multi-national companies. When the bill is enacted to law, it will also benefit poor citizens who would have ordinarily been left out of the drilling, exploitation and other extraction processes. This progressive Bill in the extraction industry led to Senator Moi being voted the Legislator of the Year in the Oil and Gas Awards 2017 for exceptional legislation that has positive impact on the lives of the people.

Senator Moi was also instrumental in lobbying for Baringo County to be included in the list of beneficiaries of Equalization Fund which came to fruition in July this year after the County was left out in the initial classification by Commission on Revenue Allocation in 2013. The Fund, according to the Constitution, is used by the National Government to provide basic services including water, roads, health facilities and
electricity in marginalized areas in an effort to jump start development so that those regions can be at par with other regions in the country.

Senator Moi has also been instrumental in instituting the mega Geothermal
Development Corporation projects in Baringo. The projects have turned around the lives of the local communities. With the help of the late President Daniel Toroitich Arap Moi and President Uhuru Kenyatta, Senator Moi was able to secure funding of over KShs. 600 million from development partners that will be injected towards production of geothermal power in parts of Baringo.

As part of his humanitarian work, Senator Moi has taken deep interest in charitable and philanthropic work ranging from school and church support, to offering scholarship to students from underprivileged families.

His support for education has spurred access to education by the poor and marginalized citizens. Through the kindness of Senator Moi, hundreds of bright but needy students have been given the opportunity to pursue their dreams. As a result, many have blossomed in their diverse fields of specialization.

Senator Moi has embarked on unmatched philanthropic activities. He spent over KSh100 million to support individuals, churches, health facilities and schools in Baringo County. This gift of compassion is a shining path to Senator Moi’s lasting legacy in his belief in the power of assisting the less fortunate in the society to have a brighter tomorrow.

Among the initiatives he embarked on was the launch of Baringo Take-Off Programme (BTOP) aimed at offering opportunity to youth who fail to get tertiary education because of the grades they score in Kenya Certificate of Secondary Education examinations. The Senator made a personal contribution of Kshs. 10 million to the first batch of 279 youths to undertake technical and vocational courses in polytechnics that offered training in basic skills in plumbing, mechanical engineering, computer studies, electrical and electronics, carpentry, bakery, agriculture, health and applied
sciences, and masonry. The beneficiaries were picked from each sub-location in Baringo County. This initiative has transformed many lives as over 70 per cent of the beneficiaries are already engaged in gainful employment, thus alleviating poverty.

Since getting into politics in 2002, Senator Moi has also been in the forefront propagating peace in pastoralist regions of the country where peaceful co-existence has been elusive over the years. Through his leadership, he has been able to bring together elders from the feuding communities to find a long lasting solution. This effort has been successful since attacks among the pastoralist communities have reduced as members are embracing new lifestyles.

Senator Moi was also instrumental in talks that led to the release of Kenyans held in South Sudan’s cells. On October 31, 2017, he held talks with South Sudan President Salva Kiir. As a result, four Kenyans who had been sentenced to 67 years cumulatively together with other South Sudan nationals were released and reconnected with their families on December 6, 2017

Gideon Moi is married to Zahra Bahlewa-Moi. God has blessed them with three children – Kimoi, Kigen and Lulu.

As members of Kabarak University family, we purpose at all times and in all places, to set apart in one’s heart, Jesus as Lord. (1 Peter 3:15)