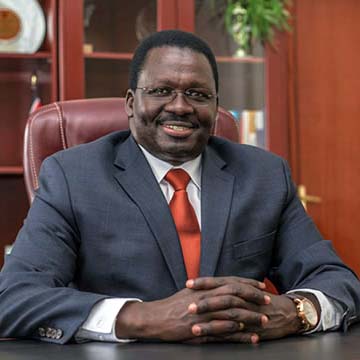 Prof. Henry Kiptiony Kiplangat has served Kabarak University from its inception in 2002.  He is a founder member of the University Council and served in the Council until May 2015 when he was appointed Deputy Vice-Chancellor (Administration & Finance), Kabarak University.

In January 2, 2017, he was officially named Ag. Vice-Chancellor, Kabarak University. Professor Kiplangat has also worked directly for the founding Chancellor, the late Daniel T. Arap Moi, Second President of the Republic of Kenya via many of the Chancellor’s affiliated institutions.

In his administrative career, Henry has held a variety of leadership positions, including two Chief Principal and CEO positions of leading private Christian co-educational Schools, namely Sacho High School (1995 – 2001) and Moi High School – Kabarak (2001 – 2015). During his tenure as a High School Principal, he performed exceptionally well through effective leadership styles and integrity.”

Henry’s management skills enabled him to rise to the top of the charts of Kenya’s Best Performing Schools.  He is a strategic planner; team leader; articulate and persuasive communicator; result-oriented and an analytical thinker. These, coupled with excellent interpersonal skills, allowed him to translate strategy into management objectives with measurable key business indicators, in this case, a top performer. It is these ethos that saw him move the previously unknown Sacho High School, where he was Principal from 1995 to 2001, from the lower ranks to compete with giants.

During his tenure as Principal of Sacho High School, Professor Kiplangat did not to rest on his laurels; he decisively moved the school from number 126 to number 8 in the Kenya Certificate of Secondary Education National Exams in the span of six years. His vision for excellence did not stop there as he brought this success story to Moi High School Kabarak. Armed with three key principles: vision, discipline, and leading with the heart, he took the School’s motto; “On Earth We Rise,” literally and drove the school’s performance from an average to excellent, attaining position one in Kenya in 2012, and has since remained at the top. As a result, in 2013, the Kenya Secondary Schools Headteachers Association (KSSHA) and Ministry of Education awarded Prof. Kiplangat the Principal of the Year Award. Similarly, the KSSHA (Nakuru Chapter) Principal of the Year Award went to Prof. Kiplangat in recognition of the outstanding performance of Moi High School – Kabarak in Nakuru County.

Prof. Kiplangat is a firm believer in the Lord Jesus Christ and also a seasoned veteran in biblical evangelism which is core to institutions he has been entrusted with and has a brilliant business mind that has seen these institutions prosper economically. He also has a deep understanding of Kabarak University’s history and culture that is precious to the Chancellor and his vision for the establishment. He serves as Chairman, A.I.C. Kabarak Local Church Council which is responsible for the spiritual guidance of Kabarak Institutions and recently fulfilled the Biblical calling and ascended to Jerusalem, the Holy City, Capital of Israel and is henceforth authorized to bear the title ‘Jerusalem Pilgrim.’

Henry is a founder member of the Kabarak University Teaching, Research and Referral Mission Hospital Task Force and member, Board of Directors of Moi High School Kabarak, Sacho High School, Moi Educational Centre Limited and is the Board Chair of Sunshine Secondary School Limited. He is also the Chairman, Transnational Bank and Director, Siginon Freight Ltd. Prof. Kiplangat has previously served as a Director of Industrial Development Bank Capital Limited, Milling Corporation of Kenya and Eveready East Africa Ltd.

Henry is committed to serving the community and is the Chairman, Board of Management of Baringo High School, Sirwa Secondary School and Mogotio High School.  He is a Life Member of the Kenya Red Cross Society among other outreach activities. He has been recognized for his pioneer contribution to the MHS-K Alumni Endowment Fund and support of the Africa Inland Church. Prof. Kiplangat is a responsible family man and is married to Dr Gladys Jerobon Kiptiony who has prayerfully supported him through his illustrious career and together they have three wonderful children, namely; Daniel Kalya, Ann Jebaibai and Ian Imanda.

Prof. Kiplangat received his B.Ed. (Arts) from Kenyatta University, M.A. (Education) from the University of Lancaster and PhD (Educational Administration and Planning) from the Catholic University of Eastern Africa. He is also an alumnus of Galilee International Management Institute, Israel.

Read More about the Vice-Chancellor

As members of Kabarak University family, we purpose at all times and in all places, to set apart in one’s heart, Jesus as Lord. (1 Peter 3:15)